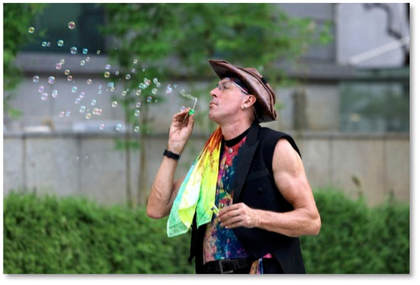 A bubble is simple, yet profound. No one can own a bubble. It belongs to all of us. When I make that big bubble and everyone says “Wow!” that’s the awareness of connection and clarity that transcends barriers of race, ethnicity, and socio-economics. Once we know we’re connected, it becomes harder to dehumanize others, and we begin to evolve and see the world differently.

A little about our founder

For the past 25 plus years, Sandy has been and is a speed skating coach and a coach of functional strength conditioning for beginner to Olympic class athletes; he also works with those of special needs. Before coaching he was a chef, and has held two world records in speed skating, as well as gaining other athletic accolades that could fill a book. He has since added bubble artistry to his resume.

“Lessons of the Bubble” is about Sandy's journey and lessons learned not just from the bubbles but from his observations of others when exposed or re-exposed to their magic.

The 1999 24-hr Inline Speed Skating World Record Holder, now turned coach.  Sandy Snakenberg has recently earned his title as a "Bubbleologist". As a bubble artist, Sandy performs In locations around the world.

​You can keep up with him or become a member of the "Order Of The Immaculate Bubble" yourself on the Bubbles by Sandy Facebook page.

Has made a living as a Chef, Athlete, Functional Conditioning Coach, Olympic Weightlifting coach, referee. Coached speed, dance, general skating and world record holder for the longest distance skated in a 24 hour period. He has also worked extensively with special needs individuals in the area of skating and conditioning. Now evolved as Bubbleologist, Artist, Entrepreneur, and Entertainer.

Over eight years ago he discovered the magic of bubbles. Over time he developed his technique and now has been performing professionally for over 4 years.

He has done a multitude of both paid outdoor and indoor performances as well as busking  street performances in Indonesia, Singapore, Malaysia, Thailand, Philippines now back in USA.

Over the years he has experimented with and perfected his own bubble solutions and equipment. His dedication to the art, science and magic of bubbles has earned him the title of "Bubbleologist" by my teachers, mentors and peers.

Sandy Snakenberg. AKA, “Snake”, The Bubble Pirate. Back from South East Asia of The “Bubble World” Tour...   mostly by bicycle with trailer. Performing, covering over 6,000 km of Singapore, Malaysia, Thailand. Took a break in an old home. SanDiego. Performing for events, birthdays to funerals and everything in between. Road shows. Events. Indoor or outdoor and Street.

Some bubble performances include: